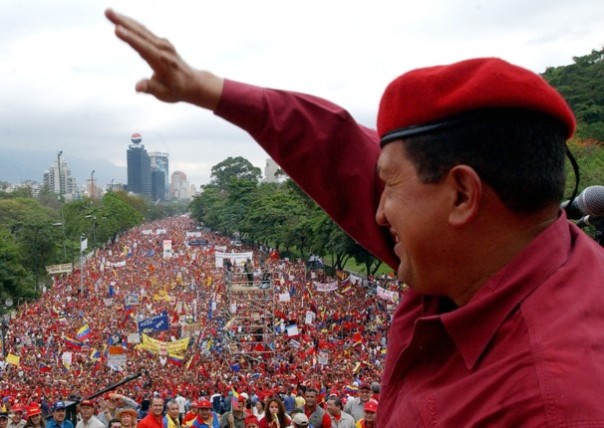 On Tuesday, March 5, the people of Venezuela and workers all over the world lost the greatest revolutionary leader of our time, President Hugo Chavez. Chavez’s death was sudden, but it came after nearly two years of battling cancer that included four very invasive surgeries in Cuba. Chavez won re-election as President of Venezuela handily in 2012, defeating right-wing opponent Henrique Capriles at the polls.

Since he was elected President in 1999, Chavez dedicated himself to building socialism and an anti-imperialist mass resistance in Latin America and across the world. Chavez’s legacy was unabashedly revolutionary and pro-worker, cutting unemployment and poverty in half over the course of his 14 years in office. Working with other progressive and anti-imperialist countries around the world – from Bolivia to Cuba, from Syria to China – Chavez oversaw the creation of a new alliance of nations to curb the influence and expansion of the imperialist empire. The revolutionary accomplishments of Chavez’s government are impossible to list outright, although Venezuela Analysis has done an incredible job compiling articles about the Bolivarian revolution.

Return to the Source wants to publicly extend our condolences to the people of Venezuela on the death of Comandante Hugo Chavez. We also want to extend our best wishes and solidarity to Vice President Nicholas Maduro, a bus driver, trade unionist, and revolutionary socialist who will run for President as Chavez’s successor.

However, we want to take this time to emphasize the very real danger that the Bolivarian Revolution faces from the imperialist countries in the North, as well as corrosive elements on the Left that seek to divide the people. The following article was written by Professor Toad for The prison gates are open about the disgraceful left-opportunism by Trotskyite forces on the Venezuelan Left. It’s an important comment on the internal politics of the United Socialist Party of Venezuela (PSUV), and revolutionaries should read it to better understand the need for solidarity with Vice President Maduro and the leadership of the PSUV against divisive, factionalist politics. END_OF_DOCUMENT_TOKEN_TO_BE_REPLACED

Changing Attitudes Towards Socialism: A New Years Editorial from Return to the Source

Although the concept of generations is often abused by idealist historians in lieu of a materialist analysis of great changes in society, there is an element of truth in the idea that a common set of world experiences influence the beliefs and actions of young people. In the Western world, the ruling class goes to great lengths to ‘disprove’ socialism – and more specifically Marxism-Leninism – with all manner of distortions, lies, and falsehoods. With a near monopoly on news media and academia, they have successfully waged an ideological battle against socialism to accompany physical state repression of revolutionaries in the United States and Western Europe.

However, their efforts are not always successful, and at many times in history, young people from the working class and the universities have seen through the propaganda and recognize the achievements of the world socialist revolutions. They use these revolutions and experiences as inspiration for their own struggle against the imperialist ruling class in their own country, and they draw strength through international solidarity with oppressed people in other countries who win their freedom through revolution. END_OF_DOCUMENT_TOKEN_TO_BE_REPLACED